At Spurgeons, we are all about supporting vulnerable and disadvantaged children and families facing huge challenges in their lives.

We are so privileged to be working with vulnerable children, especially those that do not know where to turn for help when help is needed.  Whenever we see or hear about something that a young person is going through, something that we know to be wrong, we are so grateful that we can be there for them, giving a voice to those who are unable to speak for themselves.  Children like Ben.

For Ben, the scariest part of the school day was going home.  Frustrated and scared to say anything about what he was going through there, Ben took out his anger on children at school.  Then, just when Ben thought things couldn’t get any worse, lockdown hit.  The counselling sessions that had just started at school went online; no longer was Ben able to speak freely.  Worse, he had no escape from the abuse he was experiencing at home.  When he eventually returned to school, Debbie, his counsellor, became Ben’s lifeline, he no longer felt alone. He was being heard, he felt cared for.  Feeling safe, able to talk freely, the care and protection that Ben had needed for so long was arranged.  Ben’s situation was turned around.

can help provide resources for counselling sessions to help children talk
and open up about what they’re going through. These can be particularly helpful
for younger children.

can help provide more sessions and safe spaces for children like Ben who may otherwise have no one they feel comfortable enough to talk to.

Prefer to donate over the phone?

In 1867, Baptist preacher and writer, Charles Haddon Spurgeon, was inspired by his faith to found an orphanage in London, offering vulnerable children care and education. Today, his work continues through Spurgeons Children's Charity.

The way in which we support children and families has changed enormously over 150 years.

We started with six boys and a single 'Matron'. Now, each year we will typically have contact with around 30,000 children and young people and protect hundreds from harm.

At Spurgeons, we believe every child deserves the opportunity to live a happy and hope-filled life; that no child should face abuse, neglect or uncertainty.

We couldn't do this without your support. 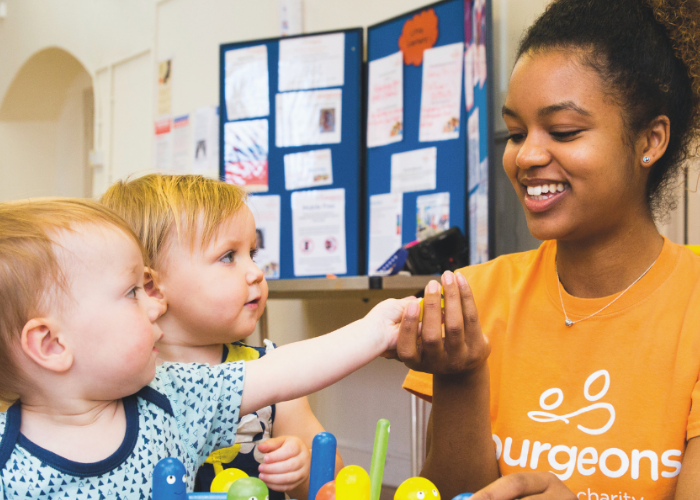 Why support Spurgeons as your Christian charity?

Discover why many individuals, churches and organisations are providing hope to vulnerable children and families with Spurgeons.

I have been interested for many years and applaud all the work that is done to help those in special need - Supporter, September 2020

I have supported Spurgeons for some time and I like the Christian values of the organisation - Supporter, June 2020

I am hopeful that Spurgeons will go on supporting families for a very long time - Supporter, December 2020

Request a copy of this resource

We also use third-party cookies that help us analyze and understand how you use this website. These cookies will be stored in your browser only with your consent. You also have the option to opt-out of these cookies. But opting out of some of these cookies may have an effect on your browsing experience.
Necessary Always Enabled

Any cookies that may not be particularly necessary for the website to function and is used specifically to collect user personal data via analytics, ads, other embedded contents are termed as non-necessary cookies. It is mandatory to procure user consent prior to running these cookies on your website.