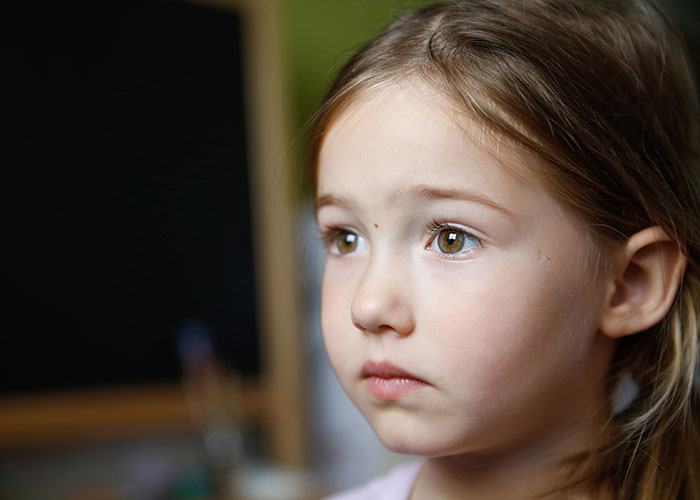 Mum, Donna*, had survived domestic abuse and had started a new life with James*, but when 6-year-old Holly* started showing signs of trauma, the whole family was affected. We helped Holly and her older sister to move forwards and gave the whole family the support they needed to look to the future. The family were referred to our Play Therapy team as part of a multi-agency plan to help them overcome their serious issues.

Our Play Therapy team were called in to help after concerns had been raised about Holly. Unlike her class mates, who were happy, playful and engaging, Holly was a very anxious little girl. She found transitions difficult, and became extremely anxious, crying and worrying whenever she was in a new situation or around new people.

We arranged with Holly’s school for our Play Therapy bus to be on site once a week to give her one-to-one sessions with our therapist, while keeping her within a familiar setting. Working with the Play Therapists, Holly was given a safe environment to explore her feelings and start to identify them. By allowing herself to feel her emotions in a controlled way, Holly was able to begin working through some of the things that were worrying her. We also included her older sister in some of the settings as she had also been referred to us for the same issue, and the two sisters were able to help and support each other through the sessions.

Holly came to 16 weekly sessions with the therapist, and in that time we have seen a transformation. Her teachers have commented on how much her confidence has grown and they are delighted that she is now able to join in with the other children and make a contribution in class. Her family have also noticed the difference and Holly is a happier, more contented child.

When we asked mum how the Spurgeons Play Therapy team had helped, she commented:

“It has made a massive difference, really. Holly loved her Play Therapy sessions. She told me she was sad to leave and asked when she could go again! She told me that her favourite thing was painting. For me, it has given both my girls the help they needed to put the difficult times behind them. They are much better at listening to me now, and are much better behaved. Holly is happy and has the confidence to try new things – I feel like we have a second chance, and that we have got a really strong relationship again now. Thank you Spurgeons.”

*Names have been changed to protect the identity of the family